Maya J. Berry
›
Perhaps Eshu-Elegguá demanded to be placed at the front of the stage to get a better vantage and guard against the onslaught of potentially harmful forces the rumba ensemble members feared.
Eshu-Elegguá is a divinity in the Regla de Ocha-Ifá pantheon characterized as a warrior and messenger. The divinity is born from stone to serve its patron. After divination, potent life-giving forces are packed deep inside, and then molded and carved to order. Enslaved Africans in Cuba taught their descendants that a good relationship with this divinity is helpful for making risky choices and providing protection when embarking on a treacherous new beginning.
Just a few months prior, the ensemble was on tour in the U.S.: a rare privilege for the artists and a diplomatic achievement for those on both sides of the Florida Strait who seek to thaw the U.S.’s Cold War foreign policy toward the rebel island. Two members would never reappear in the NYC hotel lobby where the rest of the ensemble waited to be taken to the airport. The musical director would be one of the absentees. Upon the rest of the group’s return, they expressed anxiety about many eyes (surveillance, scrutiny) and tongues (gossip) on them, questioning their foreknowledge of the plan to defect. They relied on their faith to help them maintain their good reputation and navigate a path forward in Cuba in the aftermath.
Perhaps the group members who decided to not return had consulted their own Eshu-Elegguá, who saw that it would be their last chance to enter the U.S. and still be covered under the controversial "wet foot, dry foot" policy. They would seize the opportunity before Obama closed that Cold War path for Cubans to U.S. citizenship in 2017, making them subject to deportation like every other migrant suffering from the consequences of uneven trade. This policy change characterized a new era of so-called "normalization" in U.S.-Cuba relations.
The lived experiences of structural vulnerability are often characterized as normal. This was not the first, nor would it be the last, time that devotees summoned energies hidden in stone to help them navigate uneven terrain. The paths available for their choosing are made riskier by powerful forces that historically bear on Black life in the Americas. Eshu-Elegguá must lead the way. 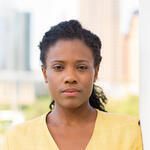 Maya J. Berry is a dancer and sociocultural anthropologist by training who brings a Black feminist approach to the research of Black popular performance, politics, and the sacred in Havana, Cuba. Prior to joining the University of North Carolina at Chapel Hill as assistant professor of African diaspora studies, she was a postdoctoral fellow at the Institute of Sacred Music at Yale University.