In 2016, the Archdiocese of Denver commissioned the Catholic iconographer Vivian Imbruglia to write an icon of the Servant of God Julia Greeley. A formerly enslaved woman and candidate for sainthood in the Roman Catholic Church, Greeley rose to prominence in the 1880s for her charitable work among Denver’s impoverished families and firefighters. More than a portrait of a holy person, an icon structures a present encounter with a saint and the community that the saint represents. What kind of encounter does Greeley’s icon conjure with race and Catholicism in the Old West?

Greeley is illustrated with a disfigured eye, holding a white infant against the backdrop of Colorado’s Rocky Mountains. Born into slavery in Missouri ca.1840, Greeley’s eye was caught in the lash of a whip as a slaveholder beat her mother. In the 1870s, she traveled to Denver to work in the home of William Gilpin, the first governor of Colorado Territory. At night, Greeley would drag a red wagon through the city, distributing supplies to white families too embarrassed to accept a Black woman’s aid in the light of day. In 1914, while working in the home of Agnes Urquhart, Greeley learned that Urquhart’s only son had died in infancy. Julia promised that Agnes would have another child, a "little white angel." Greeley’s only photograph was taken with Agnes’s baby, Marjorie Urquhart, in 1916, as testament to her fulfilled promises and prayers.

Greeley’s life story is consolidated in the icon’s symbolism—the gold dusted mountains, the red wagon, the sacred heart, the baby, her missing eye—and circulates throughout Catholic Denver on a 4x6 prayer card. As it circulates, the icon emphasizes a flow of power within a Catholic material economy that produces, refines, and consumes particular narratives of Catholicism’s racial past. Greeley’s scarred eye recalls her own former status as a human commodity. Gold dusted Rockies offer vague reminders of the Vatican’s complicity in Spanish America’s hemispheric gold rush. Greeley’s holiness is determined by her capacity to highlight Catholic benevolence. The value attributed to her icon lies in summoning violent moments, if only to forgive the past. 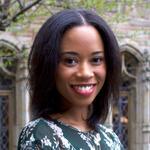 Alexia Williams is an Assistant Professor of Religion and African American Studies at the University of Illinois Urbana-Champaign. Her research interests include Afro-diasporic religions and cultures, U.S. Religious History, Roman Catholicism, and Religion & Popular Culture.