In this image, entitled Hüdayi Yolu (The Way of Hüdayi), we see a watery background constructed by abstract zigzags that represent the Bosporus strait dividing the Asian and European sides of Istanbul. Hikmet Barutçugil usually creates his ebru, or paper marbling art, and then commissions illustrators to work with the random and surprising outcomes of the process. Here, Hacer Ünal Hazar, a student of Barutçugil, completed the painting appearing in opposite corners of the work, and Ali Hüsrevoğlu, a well-known calligrapher, wrote the name Hazrat ‘Aziz Mahmut Hüdayi (d. 1628), which dominates the center of the work.1 Hüdayi was a Sufi scholar and poet, one of the principal founders of the Celvetîyye Sufi order and patron saint of Üsküdar, an older neighborhood on the Asian side of Istanbul. After his name appears a shorter phrase in Arabic that translates as "May his secret be made sacred," a eulogy for Sufi saints. At the top right, we see Hüdayi’s mosque-shrine (1594, rebuilt in 1825) alongside the distinctive dome and minarets of the Mihrimah Sultan Mosque (1543-48) and the angular lines of the Fountain of Ahmed III (1728-29), prominent Ottoman Islamic structures in Üsküdar. On the lower left, on the European side of Istanbul where the Ottoman sultanate was once headquartered, the Süleymaniye Mosque (1550-57) can be seen as it would appear to a viewer standing on the banks in Üsküdar.

The illustration also contains a reference to a little-known legend from the life of Hüdayi, according to which when the Sultan Ahmet Mosque was completed in 1616 during the rule of Sultan Ahmed I (d. 1617), Hüdayi was invited to preside over the opening ceremonies and to give the Friday sermon. He lived in Üsküdar and had to cross the Bosphorus to get to the mosque, but the weather was stormy and dangerous for sailing and the sailors were scared, yet Hüdayi was able to cross the water without trouble, his small rowboat unaffected by the waves. From that day on, the route he took on the water has been called Hüdayi yolu. Sailors follow it on stormy days as they believe it is sanctified by the baraka, or blessing, of Hüdayi.2 Visually and discursively, Barutçugil’s Hüdayi Yolu draws the Ottoman cityscape of Istanbul into dialogue with its Sufi history, using the fluidity of ebru marbling and Arabic calligraphy to evoke the watery bridge between continents that is the Bosporus strait. In so doing, the artist collapses the temporal bridge between past and present, introducing innovative and contemporary techniques and materials to the traditional Turkish craft of ebru and drawing a triumphant, Ottoman, Islamic history into a spiritual vision for the present Turkish republic.

The location depicted in the piece is significant for numerous reasons. Ebristan, Barutçugil’s atelier, known as "the Istanbul ebru house," is located in the neighborhood of Salacak in the district of Üsküdar, overlooking the same route across the Bosporus depicted in the piece.3 Üsküdar was also home to some of the most renowned earlier ebru artists, such as Necmettin Okyay (d. 1976) and Mustafa Düzgünman (d. 1990), who was a caretaker of the Hüdayi shrine. The neighborhood remains one of several hubs for ebru and other traditional Turkish arts in Istanbul as well as for Sufism.

Hüdayi Yolu hearkens both to Barutçugil’s connection to Sufism and his presentation of ebru as a Sufi art. It is a part of his Ebristanbul series, in which he employs artists to illustrate historical sites of the city over what he calls his "Barut ebru" pieces. Barutçugil explains that this series of illustrations commemorates the 550th anniversary of the Ottoman conquest of Constantinople, declaring that "the imaginary world of ebru reflects Istanbul, surrounded by water, between two seas, my beloved, beautiful Istanbul, the meeting point of two continents."4 Since the Ottomans defeated the Byzantine Empire and took control of Istanbul in 1453 under Sultan Mehmet II (d. 1481), the city has often been presented as Islamic. Later Ottoman sultans commemorated their victory as a sign of divine favor and a justification for Ottoman rule.5 Despite the Ottoman Empire’s endurance for centuries, the secular Turkish Republic rejected its legacy following its abolishment of the caliphate in 1924.6

But in the past two decades, the Islamist political party AKP has gained prominence and contributed to the rise of the religious middle class. Concomitantly, neo-Ottomanism has increased, emphasizing the city’s Islamic context and reclaiming the city’s connection to its romanticized Ottoman past and its Sufi history in particular.7 In Istanbul, religiously-oriented Turks embrace its historic buildings and neighborhoods in their attempt to claim "Muslim space" and assert the Islamic soul of the city.8

Working with the Ministry of Culture, Barutçugil has been able to get ebru official recognition and support; the AKP promotes the ebru in state-sponsored art contests, exhibitions, and conferences. Barutçugil, like many contemporary practitioners of "traditional" Turkish arts, participates in the nationalistic commemoration of the Muslim conquest over the Byzantines. His art, such as Hüdayi yolu, makes visible a process of renewal and a new approach to Islamic artistic heritage in contemporary Turkey, containing references to Sufi symbolism and sainthood, neo-Ottoman nationalist placemaking, and Islamic aesthetics.

Hüdayi Yolu is representative of the growing trend of "traditional" Turkish artists using new artistic techniques to depict historical scenes and heritage. Among urban Turks, both conservative and secular, Sufism has become "trendy." Sufism-related tourism generates a significant source of income; Konya, the burial site of Rumi, is a popular destination, and whirling dervish shows are common at restaurants and cultural venues.9 Both secular and religious Turks adopt the aesthetics of Sufism, including associated artistic practices, especially calligraphy, depicting the names of God and other spiritual messages. Prints of Barutçugil’s pieces can go for upwards of a few hundred dollars while his original work sells for many thousands of dollars, and to have an original artwork is a status symbol among some Turks. Barutçugil’s work and that of other "traditional" artists can be found in homes, places of business, and government offices.

The background of Hüdayi Yolu is representative of Barutçugil’s style, developed in the 1970s after much trial and error, which he calls Barut ebru, after himself.10 Basic techniques of ebru include creating background patterns and then manipulating paint pigments mixed with ox gall with thin needles to form flowers, birds, and geometric shapes.11 Barutçugil’s flower pieces have a signature look that someone familiar with ebru can easily identify, but it is his extensive use of the "Barut technique" coupled with the incorporation of illustrations and calligraphy that sets him apart. He keeps the Barut method closely guarded and has only taught it to a select group of students. It most probably involves the use of acrylic paints, whereas "traditional" ebru uses paints made of natural minerals and soil. Several other artists, such as Garip Ay, have figured out how to produce the same effect, but Barutçugil does not discuss his technique publicly.12 In recent years, younger artists have started including illustrations and calligraphy in their ebru making it a widespread phenomenon in traditional Turkish art.

In interviews on TV, with journalists, and in his writings, Barutçugil frequently discusses the mystical dimension of his art, focusing on the difference between the bāṭin, esoteric meanings, and ẓāhir, external realities, both terms central to Sufi epistemology and Islamic cosmology. He explains that most artists only understand the ẓāhir of the art, which consists of the techniques and appearance of the ebru designs and is based on Western designs and aesthetics. For Barutçugil, by contrast, the bāṭin of ebru is based on Islamic-Sufism and is the heart of the art.

My fieldwork among ebru artists in Istanbul shows that Barutçugil can be credited with popularizing the associations between Sufism and ebru in Turkey and beyond. As a member of the older generation of contemporary ebru artists, Barutçugil has promoted ebru both within Turkey and among Westerners since the 1990s. In his writings and talks, he presents his take on the aesthetic principles of Islamic art through ebru. He only teaches the bāṭin of the art to students who prove they will be receptive. This advanced level deals with the symbolic meanings behind the use of colors and designs, how to "read" the paint on the water as signs of God, and how to manifest the beauty of God in art. All the while he imparts Sufi teachings and stories to initiate them into a spiritual practice. Barutçugil ritualizes the practice of ebru more than most ebru artists, likening his relationship with his advanced students and the training he gives them to how Sufi teachers train and teach proper adab, or etiquette, including teachings on self-discipline and humility. For Barutçugil, ebru not only has spiritual meanings in its symbolism, colors, and patterns, but the process of creating the art itself is representative of the spiritual journey of the artist. His main requirement to teach a student the bāṭin of ebru is that they have gönül, or a heart full of love and free of negativity.

Barutçugil gives most of his students a color print-out of a du‘ā, a supplicatory prayer, with his ebru as the background. One side gives the original Turkish du‘ā, and the other side of the paper offers an English translation (see Fig. 2). Following the Muslim tradition of providing supplications for specific activities, Barutçugil instructs his students to recite this du‘ā before beginning their ebru practice, to center themselves spiritually, and to show respect for the art. The words of the du‘ā are reminiscent of Sufi prayers that ask God for guidance and support. This du‘ā guides the artist to ask God to ensure that their artistic output is not impacted by the nafs, or ego, as well as to grant grace to the work of the artist and ensure that the artist is engaged in the remembrance of and a desire for God. For Barutçugil, the du‘ā can be used by any artist involved in what he calls "Islamic" art or by anyone interested in leading a spiritual life. It helps the artist enter into a state of piety so that when they start painting, they are worshiping God at the same time, allowing the artist’s inner being to appear in their creation. Because of his public profile and interweaving of Sufism into discussions of ebru, ebru has gained an additional dimension of spirituality that was not previously present. Although some of the earlier ebru artistshad close associations to Sufism and Sufi lodges, their practice of ebru was not ordinarily informed by their spiritual inclinations and interests.

Hüdayi Yolu is representative of a flourishing modern art form in Turkey based on an older Turkish craft. In this piece, Barutçugil gives tribute to the glory and height of the Ottoman empire and its culture combined with the spirituality of Turkish-infused Sufism. On the ẓāhir, this piece is quite straightforward, but upon further inspection, it contains hidden symbols and histories that lay beneath its surface as bāṭin. It represents a modern artist’s loving depiction of his hometown and neighborhood, an homage to a local Sufi saint, the romanticized communal memory of Istanbul as an Ottoman metropolis, and Barutçugil’s approach to "Sufi" art. 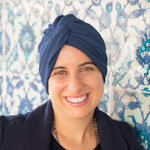 Rose Aslan, Ph.D., is an independent scholar based in Istanbul. From 2014-2022, she was an associate professor of global Islam in the Department of Religion and Theology at California Lutheran University. Her research focuses on the study of the material culture of religion and embodiment in Muslim communities.