A Stick of Wood, a Tree of Life

These comments were originally prepared for a workshop at Haverford College on "Uneasy Objects" in May, 2018. Each of us was to choose an object and articulate a range of critical observations evoked by its presence. My thanks to Ken Koltun-Fromm, our host on that occasion.

I sit in our dining room on the Lower East Side of New York City, looking at an object we call in Hebrew an Ets Chayim, a Tree of Life, one of the pair of poles onto which Ashkenazi Jews roll the beginning and ending portions of their Torah scrolls. I’ve never considered before just why they bear this name, though I know it alludes to a pair of verses in Proverbs. This one is detached both from the Torah scroll for which it was made, and from its mate that once served that scroll’s other end. When it was in use in some now-forgotten synagogue, it would have been sheltered by that scroll’s leaves, wrapped tightly around the Ets Chayim over and over again, and then the scroll in turn covered by a velvet dress. Like this:

Bereft as this one is now, one might think of it rather as the scroll’s skeleton. By itself, it might be void of meaning, evoke no memories, stir no affect. Even attached to the parchment sheets containing the handwritten Scripture it might have seemed lifeless to some bored watchers. In his remarkable "Letter to His Father" Franz Kafka noted his disappointment that the tops of the Atsey Chayim (the plural form) were merely a few inches of bare wood: "[It] reminded me of the shooting galleries where a cupboard door would open in the same way whenever one got a bull’s-eye, only with the difference that there something interesting always came out and here it was always just the same dolls with no heads.1

The Atsey Chayim are not the Torah, but merely its support or bearers, yet still their proximity to the scroll itself makes calling the poles Trees of Life somehow seem more natural. Surely the fact that they are made of wood has something to do with it, as does the simple fact that they are long and narrow. Moreover, the scroll itself is so sacred that we are forbidden to grasp it directly with our bare hands. We grasp instead these poles, these Atsey Chayim, when we remove the Torah from the ark, when we need to wind the scroll to the next place for public reading, when we want to recite the blessings before and after, when we bring it back to rest in the Ark.

This Tree of Life that sits in a corner of our dining room has lost so much: its scroll, its mate, its comfortable Ark. It came to us years ago, when the last Judaica shop in the neighborhood was being liquidated, and we have not paid it much attention since then. From a distance of twelve feet, it looks rather like a tree that is not only bare, but dead. Let us get closer to it, then. I will carry my computer toward the window, toward the Ets Chayim, as I write.

There. That’s better. Now there is more to see and to say. Okay, gently, wake up, Tree! I’m moving you now. . . and I hold you in my two hands across my lap, worrying a bit that your dust might harm the computer on which I write. Easily distracted, I put you down to compulsively check email once again. There. Sorry. I know it’s not right. I know you’re old, and you once, so long ago, used to get a lot of attention and now you get almost none. Face it, Tree, most of your kind have vanished from a Lower East Side that once was home to hundreds of thousands of immigrant Jews.

Let me look at you closely . . . First of all, you’re not quite symmetrical. You have a top and a bottom. I grasp you in one hand: it doesn’t matter which one now. In your lifetime no doubt you were held almost exclusively in either right hands, if you were a Bereishis tree securing the beginning of the scroll of Five Books, or in left, if you were a V’zos HaBerachah tree at the end. Maybe once a year, if you were lucky enough to be attached to the scroll from which the Khosn Torah aliyah was read on Simchas Torah—the day we complete the annual cycle of reading and begin it again—a left hand grasped Bereishis, a right hand V’zos.1 Did that feel different? Special?

In the shaft of your empty pole, between the two wooden disks that served to keep the sheets of parchment horizontally aligned, three tiny holes are drilled right through, where gut strings attached the scroll to your wood. When did the scroll become detached? Was it so badly worn that it had to be buried like any other text containing divine names, and if so, why not you with it? Was it rather you who were too worn out, too old-fashioned, your ornamentation too far gone?

Clearly, you did have some ornamentation on your top portion, above that higher wooden disk. There is still some ivory, some evidence of the turner’s craft, two pieces of plain glass, one piece of plain glass gone. And words are still clearly legible, pointing not to you but to the scroll you once bore: "This Torah scroll was given by Reb Yoel bar Yakov Salat and his partner Mrs. Perle Mire bas Reb Yosef. The year 5681" (so 1920 or 1921; Mazel tov, you’re a century old!). Beneath—or rather, since this is inscribed on a circle, inside that—reads the full verse containing the phrase I began with, "She is a tree of life to those who hold onto her, and those who sustain her are enriched. Her ways are ways of pleasantness, and all her paths are peace" (Proverbs 3:17-18). Though tradition tells us that "she" here refers to the Torah in general, it is you, the wooden pole, that we actually hold onto: and perhaps that is why we call you "Ets Chayim" after all.

My attention to the Ets Chayim after years of taking it for granted as part of our cluttered collection of neighborhood ephemera was sparked by an assignment to write about an "uneasy object." I understood this to suggest a focus on things that put us in our place rather than letting us put them in theirs, that shake up our categories, make us uncomfortable, make room for new ideas, different things than those we’ve turned into fetish objects lo these years and decades. And all I’ve accomplished, it seems, is another exercise in nostalgia for some dreamtime when everything was pleasant, peaceful, and filled with Torah rather than stripped of it.

Or you could look at it this way. This bare Tree of Life is obsolete, redundant, out of time and out of place. It is not supposed to be here anymore—here, that is, in a transformed, glass-sheathed, twenty-first-century Lower East Side, where the traces of immigrant life have been erased, sanitized, and gathered into museums, or commodified as "atmosphere" for an urban playground. Perhaps the act of marking it—noting its persistence beyond obsolescence, shorn of the text to which it was once an auxiliary, bereft of the hands that once grasped it and the congregation that once stood as it was lifted up—is a minor act of resistance in itself.

This bare Tree reminds me of a passing fancy I had a few years ago, that might have gone utterly forgotten otherwise, and that may still go forgotten, but at least you will have heard it from me now. That idea was, rather than writing another book this time, to write a scroll. Can this bare Ets Chayim prompt us to thread once again through these holes some strong twine, to wrap our new Torah around it, to keep it warm? Ah, you say, but we only have one stave—and since we don’t know whether it anchored the right side or the left side of its accompanying scroll, we don’t know which direction our new scroll would go. So much the better, I retort: that means we don’t know the end, or else we don’t know the beginning. Here the Ets Chayim lies, a relic "from the past" that points to futures possible. Without its mute persistence, those futures might not have been possible at all. 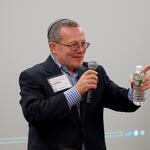 Jonathan Boyarin is the Diann G. and Thomas A. Mann Professor of Modern Jewish Culture at Cornell University. He has also taught at the Universities of North Carolina and Kansas, as well as Wesleyan University and Dartmouth College. His book Yeshiva Days: Learning on the Lower East Side will be released by Princeton University Press in October 2020.