A tabua, a sperm whale’s tooth, a sacred object in Fiji. Tabua are traditionally presented in ceremonial situations such as weddings, births, funerals, and political agreements. Tabua originally came from beached whales, as Fijians were not whale-hunters. Industrial whaling in the nineteenth century, especially as carried out by American whalers, increased the number of available whale teeth and widened tabua ceremonial exchange networks to include deal-making with American and European traffickers in sandalwood and bêche-de-mer.

A collection of scrimshaw, an artistic form developed by nineteenth-century American whaling men by engraving images on whale teeth and bone, typically on sperm whale teeth. In the economics of the whaling industry, teeth were waste. In making art out of them, whaling men created value of a different sort. Scrimshaw teeth were often given as gifts to loved ones, and eventually ended up in museums or in private collections, where they command a high price.

Shinnecock Indian Nation artist Courtney M. Leonard’s ceramic piece titled BREACH #2 (2016). The Shinnecock, of what is now Long Island, were traditionally whale hunters, and their interactions with European colonizers centered around whaling and influenced the development of early American whaling companies. Leonard writes, "BREACH #2 is an offering and account of one whale. About 48-60 teeth or the representation of the lower jaw of one sperm whale shipped and ready on a pallet for what ever may come next." 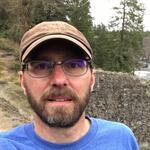 Richard (Chip) J. Callahan, Jr. is Assistant Professor in religious studies at Gonzaga University. He is the author of Work and Faith in the Kentucky Coal Fields: Subject to Dust, editor of New Territories, New Perspectives: The Religious Impact of the Louisiana Purchase, and coeditor with Lisle Dalton and Eric Michael Mazur, of the Bloomsbury Reader in the Study of Religion and Popular Culture. Particularly interested in the intersections of religion and work in the United States, especially the labors of natural resource extraction, he is currently working on a religious history of the American whaling industry and thinking about religion in the spaces of the global ocean.