Pausing on a Sunday: What Kind of Secular is the American Musical?

Scholarship on the American musical rarely discusses religion save as a spectacularized subject of certain Bible productions, of satire, or as an ethnic identifier (Jewish) for a large number of librettists.1

The work of Stephen Sondheim (1930-2021) allows a close look at the sound, feeling, and sexuality of the American musical’s secularism.1 Of particular focus is this song, central to Sunday in the Park with George (1984), which follows the assemblage of the Seurat painting,  A Sunday on La Grande Jatte (1884). Celebrations of Sondheim invariably use this song as the climactic choral assembly. (This performance, held at Carnegie Hall on June 10, 1992, is one of many such instances.)

The musical in which this song appears includes archetypal depictions of the modern artist and his attendant gendered capacities and failures. The song appears as a resolution at the end of both acts. Sondheim would point out: its lyric is a single sentence; it is a description of a process; it includes a word, "forever," that he observes makes him cry.1 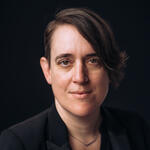 Kathryn Lofton is Lex Hixon Professor of Religious Studies and American Studies, Professor of History and Divinity, at Yale University, where she also serves currently as the dean of humanities.