Kambiz GhaneaBassiri
›
This is a pair of highly engineered, durable waterproof socks that exemplifies the rebranding of sportswear for the American Muslim market. These socks are marketed as "wudhu socks" and retail for about $30. I purchased this particular pair at a discount at the bazaar of the 2016 Islamic Society of North America convention. By protecting the feet and ankles from ritual impurities, these socks are intended to allow one not to wash one’s feet between ablutions (wuḍū’)—a dispensation in Sunni Islam known as masḥ ‘alā al-khuffayn (wiping of footgear, masḥ for short). Masḥ has historically been controversial because it raises questions about how the authority of Muhammad’s actions (Sunna) relates to the text of God’s revelation. The so-called wuḍū’ verse in the Qur’an (5:6) has been read differently depending on how Muslims remember the case endings for "your feet" in the verse. If "your feet" is read in the accusative (arjulakum) then the verse enjoins Muslims to wash their feet. If it is read in the genitive (arjulikum) then it commands the wiping of one’s feet. The four major Sunni schools of law debate the grammar, but based on the prophetic tradition (Sunna) they have generally accepted the notion that Muslim need to wash their feet during the minor ablution before prayer. Shi‘is & Kharajis on the other hand accept the genitive reading and reject the notion that any memory of Muhammad’s actions could override the text of the Qur’an.
There are other prophetic reports (ḥadīths) that recall Muhammad wiping over his footgear (khuff) rather than washing his feet for ablution (on the condition that he had not gone barefoot since his last ablution). Since Shi‘is and Kharijis do not believe that one needs to wash one’s feet during ablution, they generally ignore these reports, but Sunnis accept them as a dispensation that allows one to not wash one’s feet if one has managed to keep one’s feet and ankle free of impurities since one’s last ablution.
My interest in this product marketed to American Muslims stems precisely from the long history of controversy that surrounds the practice of masḥ. Given that debates about the relationship between prophetic and qur’anic authority as well as the nature of ritual purity itself have for centuries been embodied in Muslims’ ablutionary practices and footwear, these socks are a window into the limits of the market economy in the U.S. and its role in shaping religions. 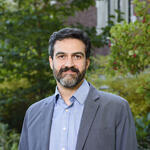 Kambiz GhaneaBassiri is Thomas Lamb Eliot Professor of Religion & Humanities at Reed College and a 2022 Benedict Distinguished Visiting Professor at Carleton College. He is also a Senior Fellow of the Material Economies of Religion in Americas project at MAVCOR and the author of A History of Islam in America: From the New World to the New World Order.