Shaping Community: Poetics and Politics of the Eruv

Shaping Community: Poetics and Politics of the Eruv 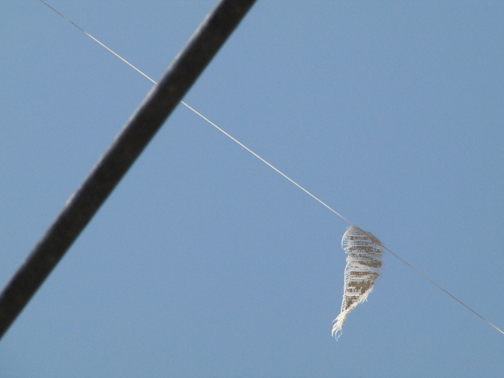 "The residents of an alley who have made a token partnership must also  prepare an Eruv in each individual courtyard, in order that their  children should not forget the law concerning the Eruv, for the  children would not notice what has been done in the alley."
The Code of Maimonides: Book Three: The Book of Seasons

This exhibition is an eruv within an eruv, intended to educate the "children" of the Yale Divinity School, the Institute of Sacred Music, and the wider Yale and New Haven community about the eruv within which they all reside. An eruv is a partnership created within a boundary to enhance the observance of the Jewish Sabbath. Rabbinic law, enunciated in the Talmud, interprets the biblical imperative to “do no work”on the Sabbath as forbidding the carrying of objects from a private space into a public space on that day. Because, however, the injunction against carrying would seem to contravene the biblical command that the Sabbath be “a joy,” the rabbinical corpus characteristically mediated between strictures and joy by instituting the eruv. During Shabbat, the eruv border operates to transform a community into a shared dwelling place. In practice, the eruv allows an orthodox Jew to carry prayer books to the synagogue, to push strollers and wheelchairs, and to allow children to play outside.

The eruv boundary would appear to be an almost ideal border. It is marked so subtly that it is almost invisible: by redefining already existing utility wires with the addition of common pieces of hardware or fishing line. No one who does not wish to needs to observe its limitations. Yet the institution of an eruv demands the cooperation of surrounding non-Jewish communities and is often the center of acrimonious disputes, including, for example, litigation currently in process nearby in the Hamptons, famous disputes in London, and competing eruv-installations in Brooklyn and in Jerusalem, where vandalism sometimes occurs. The concept of the eruv raises issues about public and private spaces, about borders and limitations and the communities they encompass that speak, in multifold and fascinating ways, to wider concerns about nations, immigration, property, and human rights.

1. This Token Partnership: The Materiality of a Jewish Spatial Practice

Here, a display of photographs of the Yale Eruv with explanatory texts serves the pedagogical purpose of familiarizing the viewer with the purpose and the materiality--as a beautiful example of urban bricolage--of the eruv. Interspersed will be a group of works by artists including the embroidered paintings of Pittsburgh artist Ben Schachter that depict eruv maps; an installation, Kafka In Space (Parsing the Eruv), by Boston artist Suzanne Silver, which plays on Kafka’s interest in the eruv to question the rationality of legislating private life; and the laser eruv installation Modern Orthodox, by Elliott Malkin, installed in the Divinity School Courtyard, which beams to a monitor in the exhibit. Another monitor with representations of the eruv in film, video, and popular culture will be installed in the gallery. An audio portion that “interferes” visually with the broadcast of the laser eruv may also be available, either as ambient noise in the gallery or via headphones. It consists of readings and music related to the religions represented within the geographical space of the New Haven eruv, along with readings of prose pieces on related issues.

In this section of the exhibit, ethereal photographs of Jerusalem Eruv lines by Alan Cohen set the stage for a provocative exhibit about the Eruv in Israel. Artists of differing political persuasions have used the eruv to visualize their positions on the Palestinian-Israeli conflict. Pro-settler artist Avner Bar-Hama has depicted the Eruv in the form of a map of Israel in the context of the loss of Jewish settlements in occupied territories and the fragility of what he regards as God’s promise to the Jews. Dani Bauer’s panoramic photographs of eruv in in the territories show how the eruv boundaries of Gilo and Modiin, nearly invisible themselves, work to render invisible whole olive groves, roads, and once-thriving communities of the area’s former inhabitants. The architect Eyal Weitzmann, who has annotated Bauer’s images in installations and books, has expressed an interest in participating in this exhibit as well.

The French conceptual artist Sophie Calle’s installation Erouv de Jerusalem consists of a table map of the Jerusalem Eruv, surrounded by photographs of Jerusalem eruv poles. Calle asked Jewish and Palestinian inhabitants of Jerusalem to show her public places that they regarded as private. Photographs of these places and the stories told of them by Calle’s interlocutors comprise a further textual and visual element of the installation. To expand this installation’s theme of interiorized borders, beyond Jewish or Israeli concerns, Shirin Neshat’s video installation, Turbulent, will be shown. Both of these consider the internalization of externally imposed borders, and the effort to cope creatively with their consequences.

Accompanying the exhibition a series of events on the theme of the eruv and boundaries will draw out implications of the notion of the permeable eruv borders for wider issues of neighborhoods, borders, and multiethnic communities.